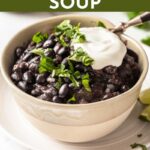 This black bean soup recipe comes together so quickly with pantry ingredients! Are there fancier things would could add? Of course, but this is a basic, super simple black bean soup that you will love. Don't miss the one secret to this recipe that creates a thick soup without any additional work. 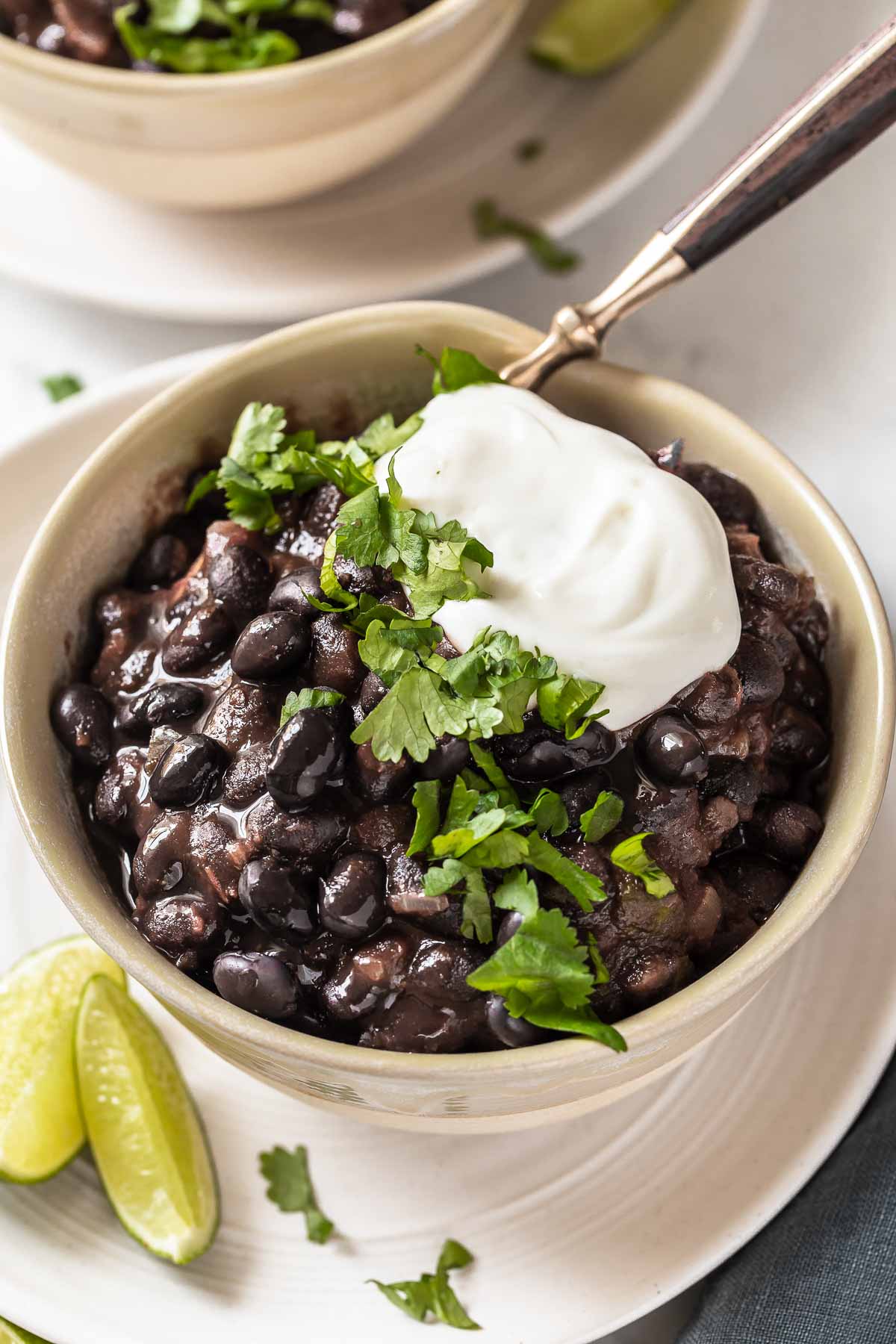 This black bean soup recipe has been written on an index card and balanced precariously between two pages of my recipe book for nearly a decade. It hasn't made its way to a permanent position in the recipe book, which would guarantee it a plastic sleeve and protection from spills. Some recipe cards float around because they are simply pulled out of the book so often to be made. This is one of those recipes.

I discovered the simple trick for making any bean soup thick from Rachael Ray. This soup is thick like it came from a can, and it's so easy to achieve! Rachael tells us to not drain the cans of beans before adding them to the soup. This feels strange, because in nearly all of my recipes where you used canned beans, I instruct you to rinse and drain the beans. But in the case of this black bean soup, do not drain the beans from the can!

You can browse all of my bean soup recipes here, but note that this is the only recipe that calls for undrained, unrinsed beans. You're just going to have to trust me, which I think you will after the first spoonful.

My endless love for this soup, and the reason I keep coming back to it year after year, is because it relies on pantry ingredients to come together. Instead of making tomato soup with grilled cheese, I make this black bean soup.

If you lack an ingredient, you can always sub. If you're out of fresh garlic, use ½ teaspoon dried garlic powder per cloves. If jalapeños aren't in season, use two pinches of cayenne pepper. Sometimes, I only have canned diced tomatoes, so I pulse them in a food processor to crush them. An even easier thing is to use a stick blender right in the can! If you lack fresh limes, bottled lime juice is just fine. Instead of cilantro, dried coriander is great. Please, make this recipe work for you and your pantry!

How to Make Black Bean Soup

Ladle the soup into 4 bowls, and top with your garnish of choice. 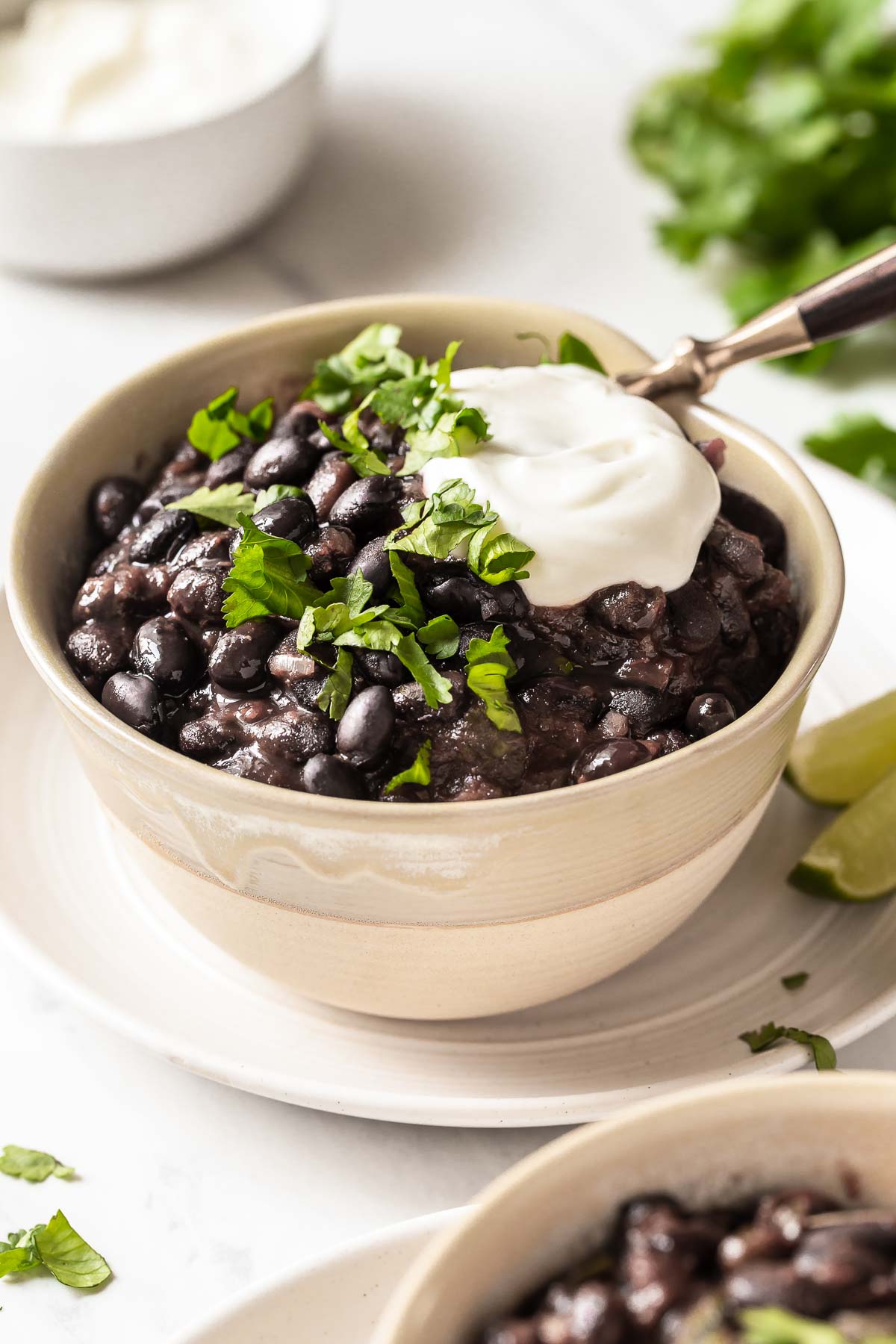 Yes, this soup is full of protein and fiber from the beans, and simple spices keep it flavorful without extra calories. Each serving has less than 400 calories.

Yes, this black bean soup with tomatoes is actually vegan. Of course, if you top it with sour cream, it's not, but simply as-written, it's naturally vegan and vegetarian.

What to serve with black bean soup:

We like to serve this with cornbread muffins, or a simple salad with a bright, tangy vinaigrette. Warm pita triangles dipped in this hummus recipe without tahini is another great side.

Jalapeño: If you don't like jalapeño, use two pinches of cayenne pepper. Or, to reduce the heat of a jalapeño, wear gloves and remove the seeds and white ribs inside the pepper.
Black Beans: You need two 15-ounce cans of black beans, but do not drain them!
Cilantro: Omit cilantro if you have feelings about it, or use ½ teaspoon of dried coriander.
Favorite soup garnishes: extra lime juice, sour cream, more cilantro, jalapeños, salted peanuts, crushed tortilla chips.