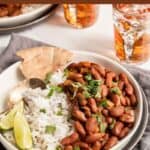 Rajma is a warm, kidney bean dish from the state of Punjab in North India. It's comforting, heavily spiced (without being spicy), and absolutely delicious over rice. If you've never had it, think of it as a vegetarian chili-- it's as rich as chili, but much more interesting and crave-worthy! The leftovers keep for several days, and reheat nicely. 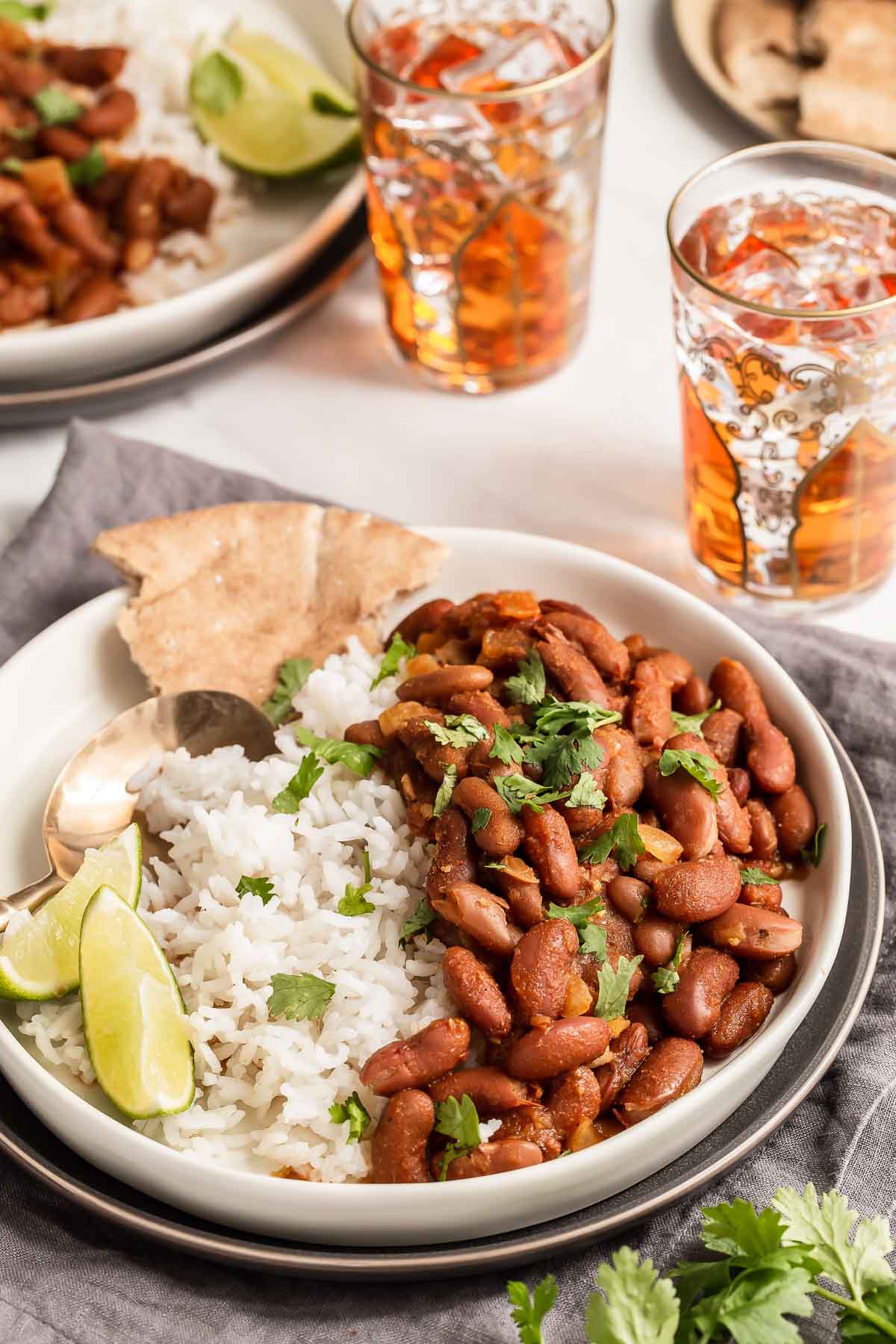 I owe a great debt of gratitude to my childhood friends that immigrated from India. I always loved eating at their houses for dinner when I was growing up, and I believe my love of beans was initially sparked at their house. It was either over a bowl of comforting yellow dal, made from orange lentils that magically melt and turn into a creamy, yellow soup as they cook, or it was a bowl of rajma that initially caused me to swoon.

The one thing both of those dishes have in common is spices. Lots and lots of warm, cozy, interesting spices that were a far cry from the food I grew up on. No disrespect to my Mom at all, but the dishes of my childhood definitely did not contain turmeric, ginger, garam masala, or whole cumin seeds. It was a whole new world to me, to quote Princess Jasmine.

It would be years before I learned about fresh curry leaves, fenugreek, and anise. My love and discovery of South Asian food is a constant life-pursuit, and if it's new to you, I invite you to start here with this rajma recipe!

As I got older, in graduate school, I started treating myself to Indian food at my favorite restaurant nearly every Friday night. The dishes rotated weekly, but if rajma was on the menu, it was always on my plate. I devoured rajma over rice and with naan.

In my opinion, one of the most beautiful things about Indian cuisines is the way so many dishes are creamy without cream. Just like a bowl of red lentils melts into creamy yellow dal, a bag of kidney beans can melt into this curry. By the way, when we say 'curry,' we mean 'a mix of things,' not exactly the curry spice. Most curry dishes have a 'masala,' or a  spice mix that gives them their signature flavor.

If this is your first time making any cuisine from India, welcome! I'm so glad to have you here. I suggest you also check out other Indian blogs, like Archana's Kitchen, or one of my personal favorites because it's all vegetarian: Dassana's Veg Recipes of India. As if those blogs won't make you want to hop in the kitchen, check out Indian Healthy Recipes by Swasthi.

How to Make Rajma 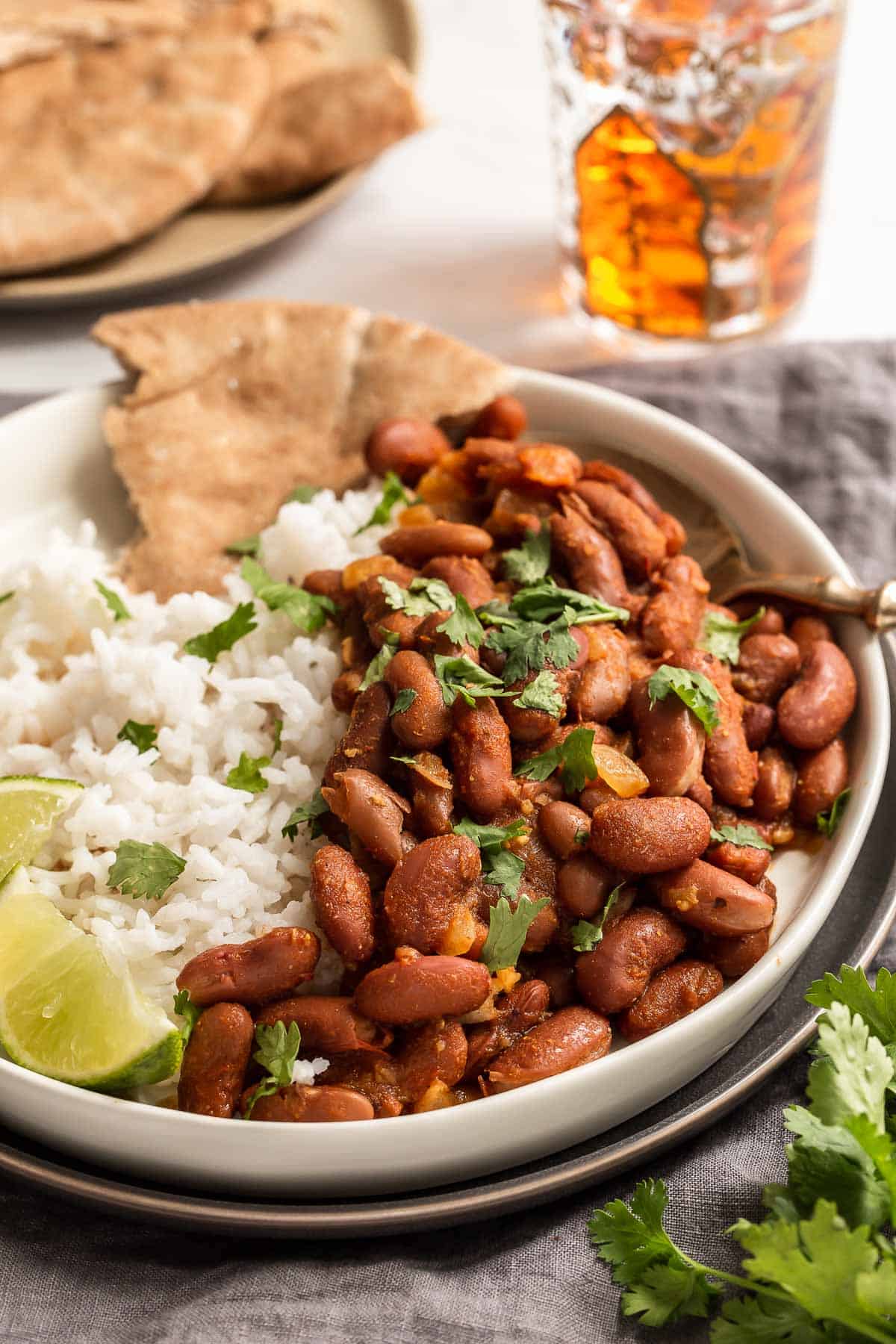 Can you make this rajma without soaking the kidney beans?

Kidney beans have a lectin in them that can be toxic if not cooked properly. Lectin is a protein that is found in many beans and whole grains, but kidney beans have higher concentrations than most other edible foods. However, it can be rendered totally harmless by soaking the beans for at least 5 hours, draining and rinsing, and then boiling for at least 10 minutes. This rajma recipe meets all of those requirements because the beans are soaked and boiled in the pressure cooker. That is why I do not recommend making rajma with raw beans.

You can check the recipe card below for the full nutritional benefits. Kidney beans are a plant-based source of protein and iron. They're also high in fiber, and this recipe is low in fat, if you omit the heavy cream.

Kidney Beans: This recipe cooks dried kidney beans from scratch, using an instant pot or pressure cooker. You may sub 2 15-ounce cans of already cooked kidney beans.
Butter: You can use unsalted butter or ghee.
Oil: Choose a neutral oil, like olive oil, vegetable oil, or grapeseed oil that doesn't impart any flavor to the dish.
Garlic: Four medium cloves, minced, or about 2 heaping teaspoons.
Fresh Ginger: Peel ginger with the back of a spoon, and then toss it in the freezer in an airtight bag or container. Then, grate it into the dish right from frozen.
Cayenne Pepper: Start with ¼ teaspoon, and add more, if you like things spicy.
Cumin Seeds: You can use ½ teaspoon of ground cumin instead of cumin seeds, if you like.
Ground Coriander: 1 teaspoon ground coriander.
Turmeric: Ground turmeric is so healthy, and so delicious!
Garam Masala: This is a spice blend of coriander, black pepper, cumin, cardamom and cinnamon.
Canned Tomatoes: Use canned crushed tomatoes.
Heavy Cream: Entirely optional, but incredibly lovely and very welcome in my bowl.