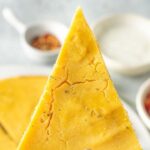 If you've never had socca or farinta, you are in for a unique treat. Socca is a flat bread made from chickpea bean flour. It's just dried chickpea flour mixed with olive oil and spices before cooking in a cast iron skillet. It's great at standing in for pizza dough, using wedges as appetizers, or just as a high-protein gluten-free bread alternative.

While it looks like slices of polenta, cooled and sliced, socca is actually a flat brad made with bean flour. The texture is a bit like a pancake or crepe but slightly more dense. It definitely has that custard texture you expect in a crepe. The flavor is more like a slightly denser pancake that can be flavored with anything you like--spices, herbs and plenty of olive oil and salt.

It's popular in France and Italy, and I'll let you settle the debate about where it was first created and who loves it more. Other chickpea recipes can be found here.

How to Make Socca or Farinata

Making socca, also called farinata in Italy, is so simple, because you just stir a few ingredients together in a bowl. Then, it rests on the counter while you pre-heat the oven.

The most important step for making socca at home that you absolutely cannot forget is to preheat the pan inside the oven. Socca batter needs to be poured into a hot pan so that it forms a crisp crust, similar to pizza dough. Plus, it's just more delicious that way.

So, grab a 12-inch cast iron pan, coat it with a bit of olive oil and pop it in your oven before you start pre-heating!

This socca flatbread is delicious just the way it is. It's like a neutral-tasting crepe or pancake that can be served as-is. It's the perfect base for adding super flavorful toppings, and can be any type of canapé you like. However, you can add many things directly to the batter for a flavor bump:

2. Combine everything in a large mixing bowl.

3. Whisk everything until smooth. There is no fear of over-mixing this, because chickpea flour is gluten-free. Gluten in regular wheat flour is what becomes tough when over-mixing, but since this recipe is gluten-free, whisk away. This is also the time to stir in any dried herbs, if you prefer.

4. Now that the batter is smooth, cover it and let it rest on the counter for at least 30 minutes, or up to 2 hours. While it rests, add ½ tablespoon of the olive oil to a large 12" cast iron skillet, and spread it evenly. Place the pan in the oven, and turn the oven to 475-degrees Fahrenheit to preheat.

5. Once the rest time is up, VERY CAREFULLY remove the cast iron skillet from the oven using an oven mit. Quickly pour the socca batter into the pan, and then slide it back into the oven.

6. Bake the socca until it pulls away from the edges and is starting to get some burnt/ brown spots on the surface. Flip the socca out of the pan onto a cutting board, and use a pizza wheel to cut it into slices and serve with fresh herbs or any type of toppings you like.

What to Serve with Socca

How do the French eat socca?

With a glass of chilled rosé, of course! Typically, in France, especially in Nice, where socca is famous, it's eaten right out of the oven with a dusting of freshly cracked black pepper.

Can you reheat socca?

Yes, whenever we have leftovers, I place it on a baking sheet and use the broiler to rewarm the socca before serving.

What is socca pizza?

Just take this socca recipe and top it with tomato sauce and fresh mozzarella to make a gluten-free pizza. It's so delicious, plus it's a sneaky way to get more beans and protein into my kids when it has this chickpea flatbread crust.

Chickpea/ Garbanzo Bean Flour: Delightfully and naturally gluten-free and much easier to find than it has been in the past. Check the ingredient list; it should only say chickpea or garbanzo bean flour.
Olive Oil: Regular olive oil is fine (not extra virgin) since we're baking it.
Salt: Coarse sea salt is always my choice.
Optional add-ins: dried herbs (especially Italian herbs), cumin, black pepper and a small amount of finely chopped fresh rosemary.