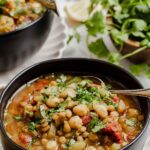 Nothing can warm you up quite like a bowl full of hearty chickpeas, lentils, plenty of warm spices. This Moroccan Chickpea Stew is simple to make in 30 minutes, naturally vegan, and it uses pantry stapes! The flavor combination of cinnamon and fresh lemon juice in the soup makes it unforgettable! We love this high-protein stew that is basically a vegan version of Harira.

This is a recipe that I used to freshly make in college for my friends. We were all hippies back then that were newly vegan, but we were growing tired of yet another bowl of black beans and rice. I combined some pantry staples one night to make this big pot of Moroccan chickpea stew, and it quickly became a house favorite!

My housemates loved the unique flavors of this stew, as commonly called harira, and it truly tastes so much better than a standard vegan soup with some beans in it. The best part is that the spice that makes this soup unforgettable is simply cinnamon! For Moroccan food, cinnamon is quite common, so once you taste this, you might be sprinkling cinnamon on more things!

The reason this is a Moroccan stew is because it contains turmeric, cumin, ginger, and cinnamon spices. My personal opinion is that the cinnamon combining with fresh lemon juice is what makes this recipe so memorable. You'll also love the high protein content, thanks to a can of chickpeas and a scoop of dry lentils.

A quick note on authentic Moroccan chickpea stew. This recipe is a vegan version of a stew called 'Harira.' Traditional Harira is a Moroccan lentil and chickpea soup that contains lamb and rice or broken pasta. My recipe here is a vegan version that mimics the meat with the smokiness of fire-roasted tomatoes.

This is a one-pot meal where you saute the vegetables, add all remaining ingredients along with 6 cups of water and simmer for 30 minutes. It's so simple, but I promise the flavor combination is unforgettable!

First, add the 3 cups of diced onion (from 2 large onions) to the bottom of a soup pot with the olive oil. Saute over medium-high heat, stirring occasionally, until they start to soften, about 5 minutes.

Then, add the celery and cook for another 5-10 minutes, until the onions are golden brown. Stir frequently to prevent the onions from burning. Before the next step, stir in the garlic and cook for 30 seconds, just until fragrant.

Now it's time to add the dry lentils, turmeric, cumin, ginger, cinnamon, salt, tomatoes and 6 cups of water. Stir together very well, and place a lid partially on the pot. Simmer for 30 minutes, and taste a few lentils to ensure they're tender all the way throughout.

This Moroccan chickpea stew keeps in the fridge in an air-tight container for up to 3 days. The spices deepen as it sits, and it is even more delicious on day 2.

Since this recipe makes a lot of soup, you can portion out servings into freezer-safe containers (like Souper Cubes), and freeze for up to 3 months. To reheat, place in pot with a splash of water or vegetable broth and heat until steaming hot.

Spice - You can add ¼ teaspoon of cayenne pepper for more spice.
Protein - As written, this recipe is entirely vegan, but traditional Harira (Moroccan Chickpea and Lentil Soup) is usually made with lamb.
Low-Sodium - This entire pot of stew only has ½ teaspoon of salt, because the lemon juice brings saltiness.